Last Step in the Creative Life of Joseph Johannes Visser 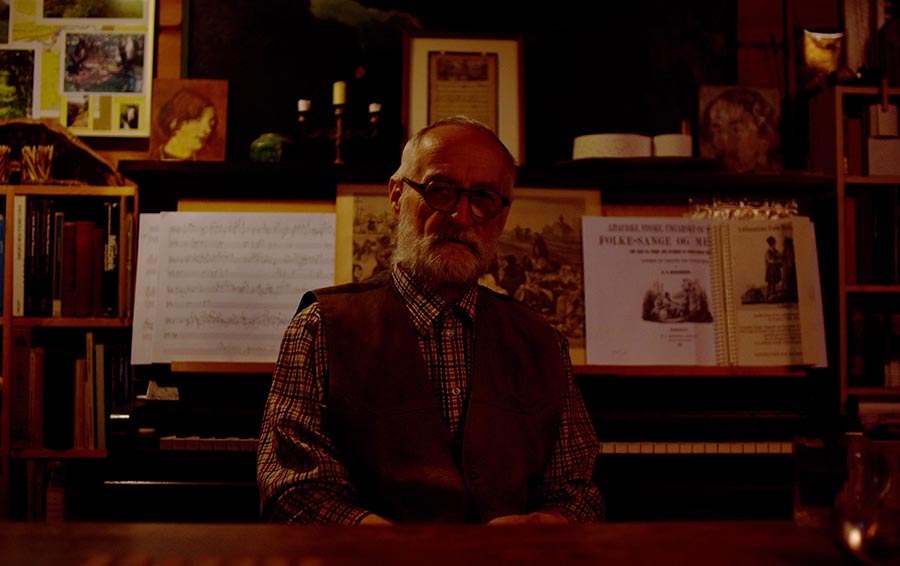 Last Step in the Creative Life of
Joseph Johannes Visser

In the first days of this beautiful autumn I had the possibility to visit my old Friend, artist’s book creator, printmaker and musician – Joseph Johannes Visser at his home in Easterliettens, in The Netherlands.

Prof. Joseph Johannes Visser – an artist, artist’s book creator, printmaker, composer, poet & translator, printman & musician &… highly educated person. Few time he was the jury member of the International Artist’s Book Triennial Vilnius. Several time was reading lectures and have made the artist’s book workshops for the students in Vilnius Academy of Arts, in Lithuania. Definitely not exaggerated we should say that he is a unofficial Lithuanian cultural attaché in The Netherlands.

In 2009 Prof. Joseph Johannes Visser with Prof. Wayne Andrew Crothers from Australia and Prof. Chang-Soo Kim from South Korea conducted the “International Artist’s Book Workshop Vilnius 2009” in Vilnius Academy of Arts, in Lithuania. In 2011 Prof. Joseph Johannes Visser and Prof. Hanne Matthiesen from Denmark gave the lecture and performance at Vilnius Academy of Arts. In 2014 he with Prof. Hanne Matthiesen made the Artist’s Book-Object Workshop and performance for students.

In 2014 with help of Prof. Giedrius Kuprevicius and Prof. Julius Vilnonis we first time invited Maestro Prof. Auke de Boer from The Netherlands to play with the carillon in Lithuania, in Kaunas. Between other Dutch composes Maestro Auke de Boer played the music of Joseph Johannes Visser – Dutch artist and composer. 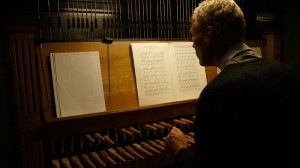 In 2016 Joseph Johannes Visser arrived with worldwide acclaimed carillonists Auke de Boer and Bauke Reitsma and two more carillonists from The Netherlands. They were invited to make concert of carillons in the Church of St. Philip and St. Jacob in Vilnius, and to participate in 21st Pažaislis Music Festival. Joseph with friends started to promote Lithuania and Lithuanian artist and compose M. K. Čiurlionis in the world. 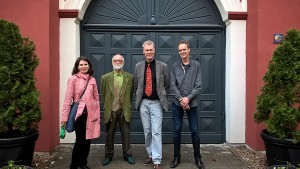 The boss of the Festival Lina Krepstaite, Joseph Johannes Visser, Auke de Boer & Bauke Reitsma from The Netherlands in Vilnius

This year Prof. Joseph Johannes Visser was invited by Embassy of Lithuania in The Netherlands to make official speech in the Embassy during the meeting of the 100th Anniversary of the Restoration of Lithuania’s Independence! 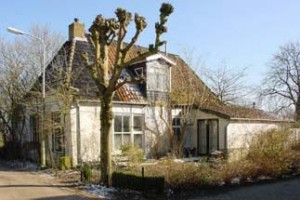 After old and intensive work, he is absolutely very hard worker, after many projects in art, printmaking and musician in The Netherlands and abroad – Joseph Johannes Visser decided to stop with the Atelier ‘It Plein 19’ and to concentrate more on music. And here I got the invitation from my Friend to visit him in his house in Friesland.

I love to drive, so for me to drive to The Netherlands with personal car is something like meditation, driving alone in silence for few days. But when I drive, and when I coming to the frontier of Germany from Poland side, I always remembering this scary feeling of my first travels to Germany in 1994 and later. It was terrible times, Poland was a racing field without speed limit as the criminals controlled all roads. On frontier of Germany you had to wait many hours together with “businessmen” and criminal people – you were praying and waiting, waiting and praying. On this time, it was not frontier of Germany, it was frontier of the Freedom. And if you pass the frontier, you were crying. But much more people were crying when they had to return back in the “prison”… Even to return back to my country, to Lithuania we had to wait all day or and night without toilet, sitting in the car like in the bunker with closed doors. I always returning back to my memories and feelings, when I crossing the frontier with Germany, and think that one day the frontier in the West can be closed again for us… and opened “free train” to the East. 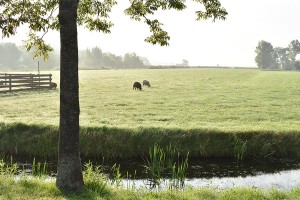 Friesland in the morning

After big speed on the highway in Germany, and after many hours standing in traffic jumps (stau), and after visiting wonderful “Sprengel Museum Hannover”, I come to The Netherlands, where so relaxing to drive and to look on the beautiful landscape and old farmhouses, on sheep in green meadow. Where so nice to think about Vincent van Gogh and Rembrandt, to see the same landscape like in the paintings with bridges, canals and sunset in old trees…

The first time when I have been in the Residency or Atelier ‘It Plein 19’ in Easterlittens, in Friesland, The Netherlands was in 2005. The owner of the Residency was very kind man – Mr. Joseph Johannes Visser. In the evenings, after printing my artist’s books he was explaining about The Netherlands and …about printing; we were talking about art and life. He gave to me good lessons. The “Atelier” was full of printing machines, wooden and metal letters, papers, art and books. Here was the possibility to print and to bind, with the help of Joseph, your artist’s book. It was place where artists together with the owner of the Residency, creating Art. Artists from many countries like Italy, France, Japan, Bulgaria, Germany, Austria and other living and creating prints and artist’s books in the Residency ‘It Plein 19’. 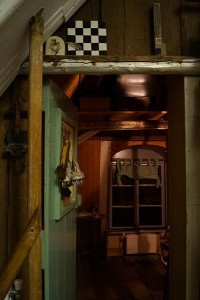 Door to the guest’ sleeping room

In the website Joseph Johaness Visser wrote:
“ATELIER IT PLEIN 19
the Studio of Joseph J. Visser
a home and studio for printers, painters, bookmakers, writers, translaters, composers, etc.
means, motive, and opportunity
to make artist’s-books, or to write music for that matter”

“the daily practice of our trade shows an ancient tradition:
a free artist is a publisher
it is useful to work to the consequences of this idea” 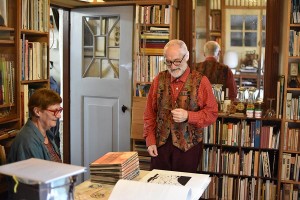 The Atelier ‘It Plein 19’ has long and interesting history.

‘Het Atelier’ started in 1973 on the Baerderdyk as a manual printing and painting studio by Joseph Johannes Visser (Joop Visser). In 1981 Atelier became in ‘It Plein 19’. In 1985 it became the cooperative – Nancy Knaap and Joop Visser – ‘Atelier It Plein 19 – Oosterlittens’.

Joseph wrote in his webpage: “We started out as free artists. Nancy used to do painting and collage mainly, she is also a paper and book restaurer working for museums and private collectors; Jacob is a maker of free graphics and collage/object-trouvé, and Joop does both painting and grafics, whilst also being a composer of modern music; both Jacob and Joop do computer grafics/digital arts (free and applied). We met as friends and then found out we had common grounds in our love for books and their making. The making of books involves about everything in the field we played in anyway, which was good for starters.

We soon found that there was a world beyond the years we had behind us in art-academies where we studied, each in very different ways, but (all three of us) thoroughly in order to make books on the same artistic level as we considered our other work to be. The freedom we knew as artists-painters made us decide to build up a complete studio/printing office in the studios Joseph J. Visser had in Easterlittens since 1973. We wanted to be able to make a book from beginning till end in our own studios. This meant that we had to start a collection of typeface and presses for printing and gilding much more complete than what we used to work with when printing poetry as a ‘sideline’. On top of that an uncertain amount of bits and pieces that you will only find a name for when you stumble upon it and find the odd old printer who still knows how to use it, with a blink in the eye: ‘the old days, aye’.

We never fought tradition but we studied it until the moment that enough experience had entered our fingers in order to have them find their own way. If anything: when making books, free and independent, there is an enormous (though rewarding) struggle to be had in order to get yourself ‘the golden cage with an open door’.” 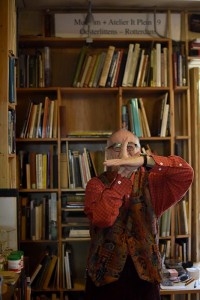 Does Joseph Johannes Visser showing that he is closing the Atelier…?

And now Prof. Joseph Johannes Visser is closing the Residency and ending all activities in the Atelier ‘It Plein 19’. From now his active creative live will be concentrated in his own home in Easterliettens.

We wish you all the best in your last step in the creative life.