“Metropolis is a handmade book venture in a spectrum of printmaking processed by artists from around the world, including two from Constellation Studios. The theme speaks to the broad contemporary urban experience and extends to the idea of the network of communication possible today.” – Karen Kunc 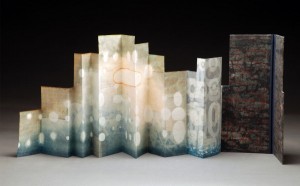 The concept is adopted from the novel by Italian writer Italo Calvino, “Le citta invisibili”, published in Italy in 1972. In Calvino’s story Marco Polo reports on cities across the empire that he purportedly has visited, to the emperor Kublia Khan. Organized in a mathematical structure Calvino’s descriptions are fantastical, of dream-like cities all named after women. Following each eleven descriptions, the two men discuss ideas brought forward by the tales such as notions of human nature and linguistics.