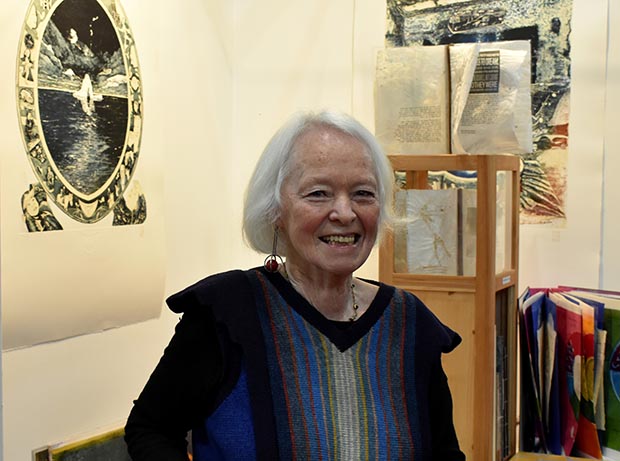 Barbara Beisinghoff five times participated in the “International Artist’s Book Triennial Vilnius”, in 2000, 2006, 2009, 2015 and in 2018. Here we have photo from our archive from the “2nd International Artist’s Book Triennial Vilnius 2000”, where Barbara Beisinghoff participated the first time in our Exhibition with her beautiful artist’s book. 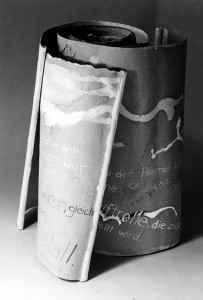 Barbara Beisinghoff is a prize-winning German graphic artist. She was awarded the Georg-Christoph-Lichtenberg Prize in 1988, in 1990 the Hameln-Pyrmont Art Prize, in 1991 the International Senefelder Prize, in 1997 the Dreieich Culture Prize, in 1999 the Heitland Foundation Prize and in 2002 the Mainz town Printer Prize. In 2018 her work was included into the exhibition Paper/Print, American Hand Papermaking 1960s to Today in the International Print Center New York.

Artist Barbara Beisinghoff held workshops in art academies in Peru in 2008 and worked 2016 with students in Vassar College, New York, as Artist across Disciplines during one month. Thus PoeTree was created and an Enchanted Forest. She conducted inspiring communicative art projects such as installations of Star Canopies in China and Germany. Pupils and students drilled patterns and whole stories into copper sheets. When you walk under the canopies with the day light above you read against the light and envision star clusters of a night sky.

In Dreieich near Frankfurt 250 children were involved 2005 in creating five Grundbuchseiten, copper reliefs with deeply etched carving of what is the most important for them in their town. These land registries are installed in the pavement around the Town Hall.

Barbara Beisinghoff creates etchings and artist books. She uses materials from fairy tale and poetry to create a dialogue between word and image, many of which can only be seen when light touches and penetrates the paper. By the metamorphosis from plant cellulose to paper, by her work with flexible watermark screens and drawing waterjet pictures into the wet paper, she gives light a form. The materiality of the paper that begs to be touched encourages the viewers to engage all their senses. Her work plays with the double meaning of the German verb begreifen, which can mean both to touch and to grasp/understand. Her drawings and pictures bring different media, genres and art forms into dialogue and undermine narrow definitions of a picture.

Barbara Beisinghoff’s works are in many public collections e.g. in the Library of Congress and Museum of Women in the Arts Washington DC, USA.