Article about the exhibition of Kestutis Vasiliunas 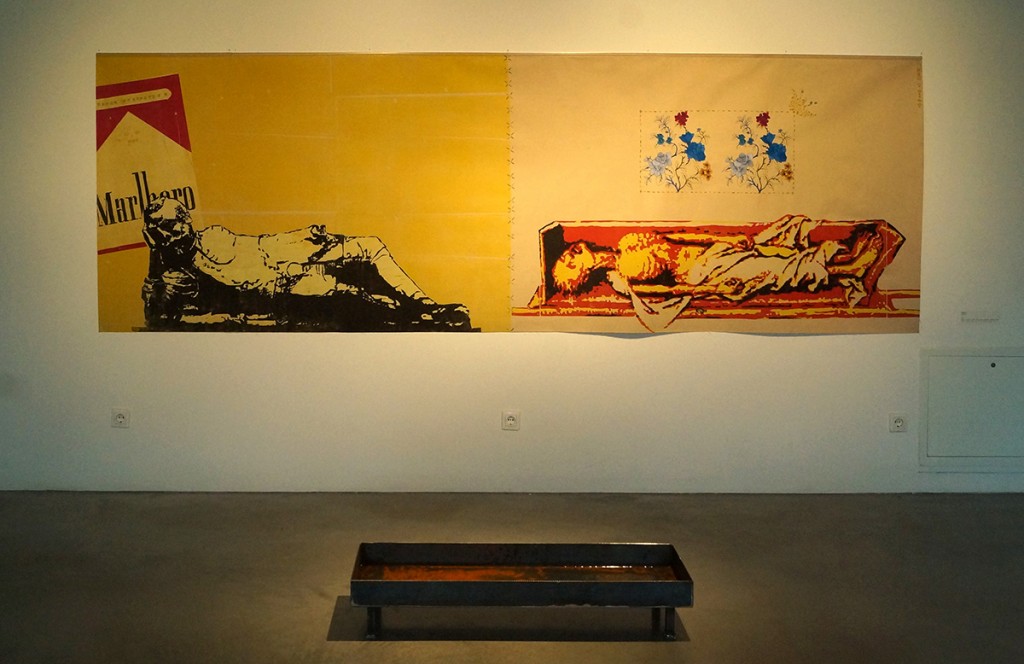 Memento Mori! Let us talk about death, which we shouldn’t fear to discuss. Scared, uncomfortable, unpleasant, forgotten in the routine suffocated by the emptiness?

Kestutis Vasiliunas is not afraid to talk about death, not afraid to speak up, transforming it into a monumentalised icon, into a recognisable, and from the 15th century on repeatedly depicted, form of Danse Macabre, or by inviting participation in allegories whose interpretation is instantaneous or revealed only with time.

In his expressive and “heavy” works, in which he prepares for what is often an uncomfortable topic, far distant from greedy hedonism, consumerism and self-delusional idyll, the artist speaks about subsistence, existence; he invokes common sense, makes one pause and think, “quote” Biblical wisdom to oneself, live everyday life realising that every single day could be the last, that falling asleep is like dying, except that when we wake up we forget to thank the Universe and God for yet another day, for one more chance not to live it in vain, but with understanding of something, changing or creating one’s own tiny world, a world that has a little more value, humanity and perfection.

This Bible quote from the Old Testament, the book of Ecclesiastes Chapter 3, says everything Kestutis Vasiliunas actually visualises and simply “portrays”. But instead of illustrating the wisdom of Ecclesiastes, he uses iconographic, artifactual visual replicas from the paintings of famous creators, turning them into visual and modern allegories. These are the icons of Giotto, Dürer, and Degas, as well as other icons of a more contemporary visualisation, signs of our society drowning in consumerism and “trademarks”. Thus we arrive at a rather peculiar, but convincing, combination, a sort of Existentionalistic Pop Art…

By using classical quotes, fusing them in one pane with the graphical depiction of everyday visualistic clichés, Kestutis Vasiliunas creates iconographic allegories characteristic of him alone, forcing attention to things happening around, things we must see, but from which we fearfully turn away, afraid of our own impermanence, afraid of our own fading vanity or that of our own “civilization”, afraid of death, afraid of wars, bullets and treason.

Jesus Christ carrying the heavy cross in the midst of yellow New York taxi cabs, Jesus kissing Judas and a queue of similar people behind him, the head of St. John the Baptist that fell in Judea, resting in Syria besieged by war, and many more such heads in the orange shirts of death-row inmates, a suddenly “lit up” Jesus-Buddha on a wall of a Parisian tavern, with raging absinthe drinkers next to him, rich men and vagabonds rotting in the same way, flowers withering in the same way, and continuously finishing Marlboro cigarettes filled with deadly poison. Images from our daily life, images we are fleeing, images we close our eyes to and swear never to betray anyone.

Who has never met an exhausted Jesus? Maybe they did, only they did not notice him. I saw him once in Vienna, near the Opera House, he looked like this: wearing a cloak, with a cross and preaching to someone through the unceasing humming of cars. Did I listen to his sermon? No, I went about my business, shrugging my shoulders, probably thinking that this freak, impersonating Jesus, had been dropped on the head one time too many.

Kestutis Vasiliunas’ prints are not only filled with “overlapping concepts”, metaphors and allegories, but they are rather complex from the technical point of view as well. The works pressed on the largest canvases, and sometimes on paper, are composed as a collage, where the wooden clichés are laid one after another in a plane as in an “airless space”, each time differently, regenerating in interchangeable colours in a rhythm of variable shapes. Kestutis, who mastered both the classic European wood-carving techniques and possibilities, and has acquired much experience in the Eastern traditional wood-carving workshops, is not at all afraid to apply wood-carving techniques that are not Dürer’s but Chinese, stroke after stroke attacking the surface with vertical equilibrious incisions and dots.

The fluidity and irreversibility of time drip from Kestutis’ self-made clepsydras, every drop might be the last, but is this really the end? Memento Mori.