A Praise to Metaphysical Treasures

The Second International Artist’s Book Triennial Vilnius 2000 will transfer from its old premises of Vilnius Art Gallery to the Gallery 5020 in Salzburg. 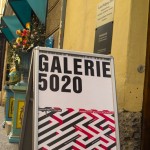 “More than 140 artists from all over the world participated in the Triennial organized by Kestutis Vasiliunas and named under the title “Apocalypse”.

As a guest professor of lithography of Vilnius Art Academy, I was destined to get acquainted and appreciate the artist and the organizer of the Triennial as well as persuade him to show several parts of the exhibition in Salzburg.

It is an extreme pleasure to know that the exhibition will be shown in the Art Gallery 5020, the conception and structure of which will impart supplementary level of significance  to the exhibition of Artist’s Books.

Obviously, the medium of the book takes the central part in the development of the European culture; to begin with structural conception and, finally, bearing in mind the technique of producing and processing, the book becomes the symbol of the structure of knowledge and education. As reserve of information expressed by letterpress and images, it is, on the other hand, considered an object that was destined to become the entrance to the perception of the world, the organizer of the visual and the perceptible, the key element and metaphor of transmission.

The Artist’s Book aspires to dwell in frames of the common book as well as broadens them; Artist’s Books, as works of art, possess their own rules, no more dependent on the bonds of narration or illustration  and are freed from the linearity of folding and turning page, though sometimes remind it. As work of art, the Artist’s Book surpasses itself and admits itself as a motive for itself – a book as a motive (stimulus) for a book.

This impression is emphasized by the Artist’s Books that ignore the common  three-dimensional form and project a new space model. There is a striking contrast between the virtual choice of the desired form and traditional canons of the book.

The book as a stimulus? Though if the first impression is displayed on the background for immanent concept of the book mentioned above, the stimulus becomes of great significance.
The Artist’s Book manifests itself as a metaphysical treasure, fascinating as an independent medium, when the sensuality of the Artist’s Book admits its abstract and hints at the sense canons, attracts the common book to occupy the private as well as public space.

Taking it into consideration, the Art Gallery 5020, as a gallery of mass media programmes, involves one of the oldest media in this exhibition, thus opening the brackets of both form and content into the perceptibility of form and content as well as sensuality of the old and the new.”